Harmonics and How to Mitigate Them

In the last couple decades, harmonics have become a greater concern in the water and wastewater industry due to the increased deployment of VFDs in the market, which positively results in an increase in energy efficiency. However, the harmonics generated by those devices must also be managed. If not mitigated, harmonics can cause serious issues in systems, and therefore raise costs. There are several different methods of mitigation — each with its own set of pros and cons. Multi-pulse drives, passive filters, active front ends (AFE), and active filters tend to be the most popular.

Every system likely has harmonics to some degree, but the question is to what level and how should they be mitigated. The Institute of Electrical and Electronics Engineers (IEEE) created a guide (IEEE 519) describing limits for voltage and current distortion due to harmonics at the point of common coupling (PCC) in electrical systems. There have been several iterations of the guidelines with 2014 being the most recent. At its most stringent, IEEE 519-2014 recommends a system total demand distortion (Current Distortion/Demand Load Current) of 5% and a total voltage distortion of 8%. Current distortion (THiD) will affect the transformer in a system, while voltage distortion (THvD) will potentially affect other loads in the system. Both distortion types should be accounted for when considering harmonics.

Harmonics are a system-wide issue, therefore when calculating harmonics, it is recommended to use the secondary side of the transformer as the PCC in lieu of calculating based on a single piece of equipment. A harmonic analysis is always recommended before deciding whether to invest in mitigation. There are several software programs available that can be used to calculate harmonics, including Danfoss’ free MCT-31. Some signs that harmonics may become an issue include transformers that are over 90% loaded or a total VFD load of over 30%. If not mitigated, current distortion could lead to overloaded transformers or overheated cables. Voltage distortion could induce malfunction of other electronic equipment or overheated motors.

One of the early harmonic mitigation methods was a multi-pulse drive, usually 18-pulse in the U.S. 18-pulse is the well-known and original method of harmonic mitigation that has been the default solution for many for decades. These drives contain three six-pulse rectifier sections that are phase shifted using a transformer. With the increase in parts for an 18-pulse drive, there comes an increase in panel size and a higher likelihood of failure. 18-pulse drives under ideal conditions will mitigate current distortion to around 5%. However, as the load decreases below about 80% or if there are voltage imbalances, the harmonic mitigation will greatly diminish.

More recently, passive filters have become one of the most common methods of harmonic mitigation. A passive filter can be stand-alone or inside of a panel with a drive. If a system has a generator backup, be aware that a capacitor disconnect should be utilized with the passive filter; otherwise, there could be a leading power factor that could cause issues at low load/speed conditions. Passive filters are relatively small, simple to install, and cost effective, especially at lower power ratings (below a few hundred amps). A quality passive filter will mitigate harmonics to IEEE levels (5 and 8%) to below a 60% load as shown in Figure 1.

Active front end (AFE) drives originated in industrial applications where the motor was acting as a generator. Users needed a way to handle energy that was returning to the drive from the motor. Thus, the AFE was created.

An AFE drive includes insulated-gate bipolar transistors (IGBTs) on both the back and front end of the drive. These dual sets of IGBTs allow energy to flow from the motor through the drive and then back to the grid. Another benefit of having IGBTs on the front end is that it mitigates harmonics. However, the IGBTs in a drive are one of the most likely components to fail as they are high speed semi-conductor switches, transmitting electrical energy at thousands of times per second. The energy levels could be as high as several hundred amps, which generate high amounts of heat. Effectively making this a moving part in the VFD, moving parts will eventually be the first to malfunction. The high amounts of heat account for most of the losses in a VFD, usually around 3% for a standard VFD. Therefore, having twice as many IGBTs in a drive greatly escalates risk of failure and can potentially increase total cost of ownership. AFE drives will meet the IEEE standard of 5 and 8%, but mitigation will fall off as voltage imbalance increases or load decreases.

Active filters are the newest and most advanced harmonic mitigation technology. Not to be confused with an AFE, an active filter is a separate piece of equipment that is either mounted in the panel with the drive or available as stand-alone equipment, thus providing greater flexibility in implementation. An active filter will continuously detect harmonics in the system and inject a counter signal to mitigate a large portion of the harmonics (Figure 2). They also can be used to mitigate the harmonics of the entire system rather than just a single drive, and the active filter can be sized to handle the harmonics from multiple drives in parallel. This can lead to savings in both capital expenditure and physical space, which is increasingly becoming a commodity.

Unlike most methods of mitigation, the active filter is installed in parallel with the drive. Therefore, if the active filter were to have issues, the drives would still be able to operate. Depending on the system, active filters can mitigate harmonics to below 5% with a load as low as 20%. Mitigation will stay strong even with voltage imbalance, and the filter will accomplish power factor compensation to ensure that the system is running efficiently. 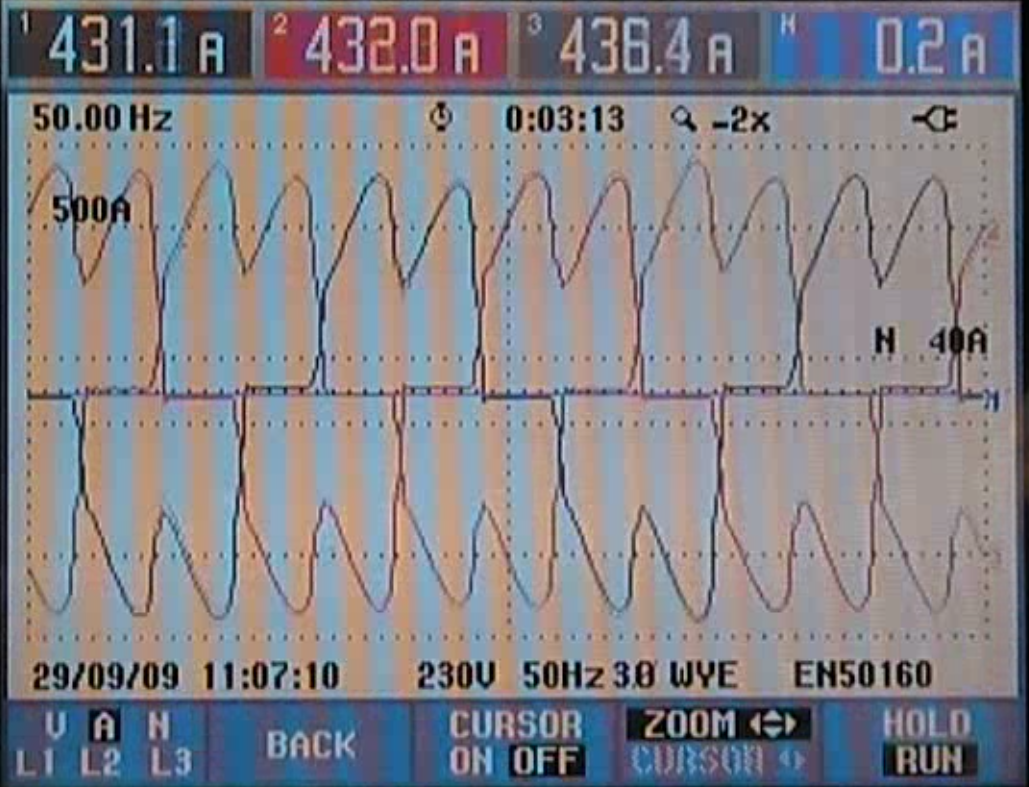 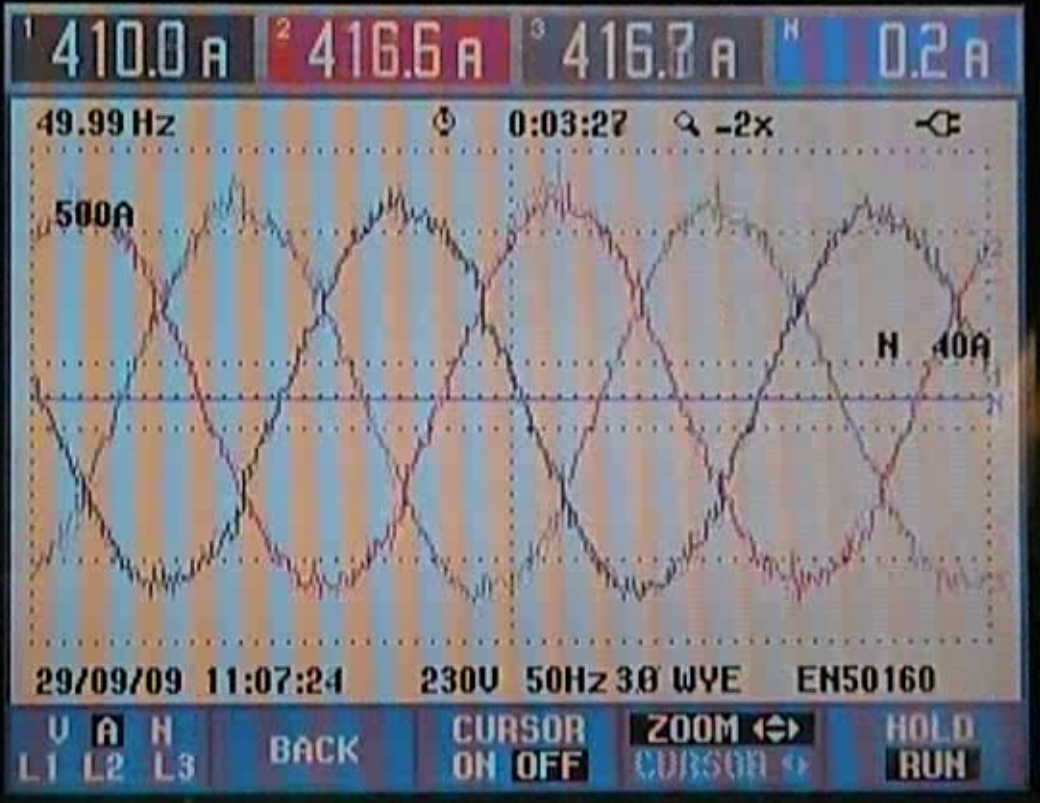 Figure 2: Waveform and Active Filters. Without an active filter (left), the waveform that should be sinusoidal is instead greatly distorted by harmonics. Conversely, with an active filter (right), the sine wave is much clearer, and the amp draw has decreased.

When attempting to meet IEEE 519-2014 standards for voltage and current distortion, there are multiple harmonics mitigation options available, and each has its merits. With higher mitigation comes higher cost, and a cost-benefit analysis is critical to determining the best solution for your system. Figure 3 generally compares the cost and mitigation for each of the solutions presented in this article.

Additionally, depending upon the application, there are different approaches that could be best. With installations using lower horsepower VFDs, a passive filter solution tends to be the best approach. At higher horsepower, or when multiple VFDS are installed in one location, active filters could save space and cost while also providing the best mitigation for the system. Active front end VFDs can be a good solution if the application supports the motor returning energy to the grid. Note that AC line reactors were not discussed as an option in this article because those alone typically will not meet IEEE 519-2014 standards. Furthermore, many drives now have the equivalent of an AC line reactor internally in the form of DC-chokes. Line reactors are the equivalent of wearing basic headphones to protect your ears when pumps are running. Passive filters, multi-pulse drives, and AFEs are equivalent to foam ear plugs — the noise will no longer be painful, but it is still noticeable. Active filters are the high-end noise cancelling headset.

In closing, while harmonic mitigation technologies have been available for over 25 years, they have made great advancements in their performance and capabilities. While there is essentially no universally perfect solution for all applications, when selecting a mitigation technology, consideration should be given to potential mitigation levels, available installation space, and total cost of ownership. 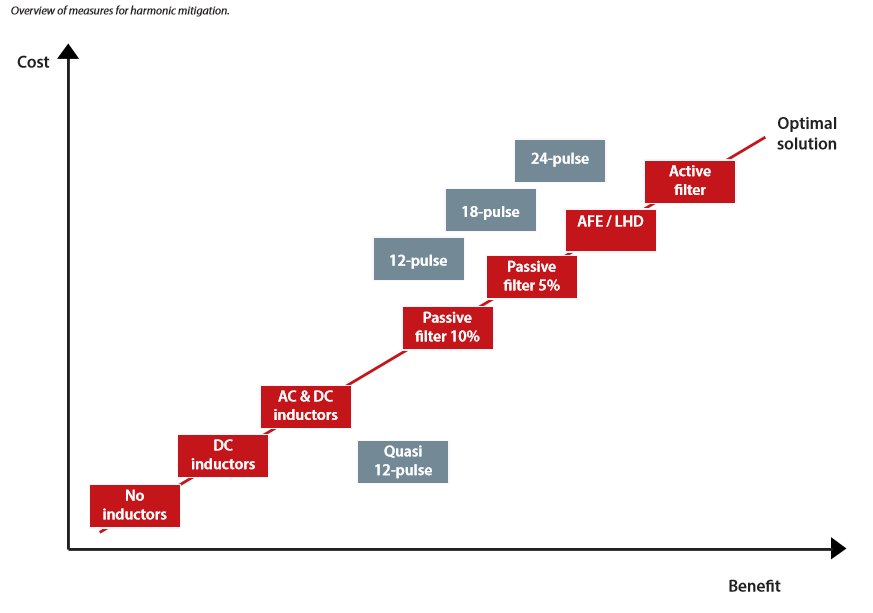 Figure 3: Cost-Benefit Relationship. Various harmonics mitigation solutions have differing costs and may be better or worse at mitigation. Close analysis of your system and calculation of harmonics using Danfoss’ free MCT-31 software can help inform the decision. Reach out to your local Danfoss contact for assistance.

Edmund Post is a Regional Sales Engineer – Water for Danfoss Drives. He manages Municipal Water/Wastewater Sales for North Carolina, South Carolina, Tennessee, Kentucky, Indiana, and Southern Ohio. He has a B.S. in Mechanical Engineering from the University of Kansas.